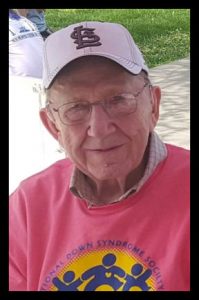 Mr. Kujawa was born on June 7, 1934, in Blissville Township, Ashley, IL the son of Frank W. and Sophie (Szopinski) Kujawa.  He was united in marriage to Mary Jane Kryger, the daughter of Andy and Martha (Skorczewski) Kryger on May 6, 1957, and she preceded him in death on August 18, 1958.  He later married Rose Ann Pierjok on August 31, 1960, and they celebrated 61+ years of marriage.

Bert worked in molding at Vernois Stove Foundry in Mt. Vernon, IL and at American Steel Foundry in Granite City, IL.  He then worked at Washington County Vocational Workshop in Nashville, IL for 2 years and then he began working at NCHS as a custodian for 11 years, retiring in 1999.  He was also known for his lawn care in Nashville, IL.  In his younger years he enjoyed dancing to polish music, especially dancing the Waltz with Rose Ann.  Bert always enjoyed visiting with his children, their families, siblings, in-laws, friends, playing cards and visiting the casinos.  Bert was a member of St. Ann Catholic Church and the Knights of Columbus Council #4384, Nashville, IL.

Funeral Service will be held at the St. Ann Catholic Church in Nashville, IL on Saturday, April 9, 2022, at 10 A.M. with Fr. Andy Knopik officiating.  Interment will follow in the St. Ann’s Old cemetery.

In lieu of flowers, plants and other gifts, memorials can be made to the Washington County Vocational Workshop (WCVW), Community Link of Breese, IL or to a charity of the donor’s choice and will be accepted by the Campagna Funeral Home.