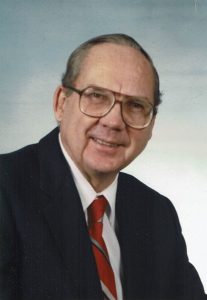 A celebration of life service will be held at Zion Evangelical Church, 1132 Country Club Road, Metropolis, IL 62960, on Friday, August 5, 2022. Visitation will begin at 10:00 a.m., service at 11:00 a.m., followed by a luncheon in the church fellowship hall. Family friend, the Rev. Dr. Charles Mize, and Zion Evangelical Church Pastor, Jim Duncan, will officiate. Final resting place will be Jamestown Cemetery in Jamestown, IL, at a later date.

Loren was born June 13, 1934, at home on the family farm in Massac County, IL, to Noah and Amanda (Meinders) Windhorst. His childhood was spent there with his parents, one sister, and four brothers.

He met his future wife, Grace Siever, at a Student Christian Foundation supper. Loren and Grace were married on August 24, 1957, at St. Paul United Church of Christ in Jamestown, IL. They first resided in Webster Groves, MO, where he earned a Master of Divinity degree from Eden Theological Seminary.

He was ordained into Christian ministry at Zion United Church of Christ in Metropolis in 1960. He served Illinois United Church of Christ congregations at Darmstadt-Biddleborn (1960-1965), Gilman (1965-1972), Pana (1972-1989), Hoyleton (1989-1995) and Metropolis (1995-1998). He retired in December 1998, after serving as pastor for his home congregation in Metropolis, where he had been baptized as a baby and confirmed as a teenager. During his years of ministry, he served on various committees in IL Conference and IL South Conference of the United Church of Christ, Pana Library Board of Directors, and Hoyleton Children’s Home Board of Directors. He was a member of several ministerial associations, Lions Club and Kiwanis.

Henderson County Cremation Services was in charge of Tennessee arrangements. Aikins-Farmer-Loftus-McManus Funeral Home in Metropolis (618-524-2156) is in charge of Illinois arrangements. Condolences for the family may be left at www.aikinsfarmer-millerfh.com.