A longtime teacher and coach at Nashville Community High School will be stepping into a new leadership role this fall. 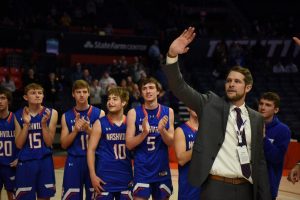 Patrick Weathers, who taught mathematics for nine years and was the head coach for the 2021-22 state champion basketball team, has been offered the principal position at New Baden Elementary in the Wesclin Community Unit. The position is expected to have been finalized at the Aug. 1 board meeting.

Weathers said the opportunity to work closer to home and further his career in school administration was something that he had to take a chance on.

“I love Nashville, and I wasn’t in a situation where I was looking to leave,” Weathers said. “This opportunity came up, and I couldn’t really pass it.”

Weathers said his family moved to Nashville in 2004, and every year since, he has been involved in the district in some capacity ever since. He graduated from NCHS in 2007 and was a member of the 33-1 Hornet basketball team that made it all the way to the Elite 8. He was an assistant coach for 11 seasons before stepping up as head coach for the last season.

“We are happy for him, and we wish him the best of luck,” NCHS Principal Mark Begando said.

Weathers said some of his favorite memories at NCHS are getting the opportunity to teach alongside some of his high school instructors.

Weathers and his father, Brad, became the first father-son duo to win basketball championships. Brad Weathers won a state championship with Carlyle in 1989.

The last season, which brought Nashville its first state championship in 44 years, was definitely one to remember. The Hornets won 32-31 in a nailbiter of a game that ended with a 7-0 run and with a game-winning block from senior Saxton Hoepker. The team went 30-4 on the year.

Weathers said the last season was so special because of the hard work from the team. He made special mention of the seniors.

“I’m so glad to have been a small part of their success. They were more than just great athletes,” he said. “They have given my family and me and the town so many fun memories that we will look back on for years to come.”

Weathers said he wanted to thank the NCHS staff, board of education, his coworkers and friends for all of their support.

“It’s going to be a challenging role going from being a teacher to an administrator,” he said. “But it’s something I’m looking forward to.”