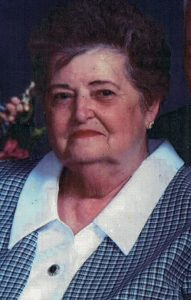 Betty Joyce Reinkensmeier, 88 of Nashville, passed away at 10:45 p.m. on Tuesday, August 9, 2022 at the Coulterville Care Center.  She was born on October 23, 1923 in Mc Clean County, Indiana, the daughter of William and Eura Morgan Long.  She married Clarence Reinkensmeier on December 3, 1983 in Nashville and he passed away on October 13, 2009.  Also preceding her in death were her parents, 2 brothers; Roger and Don Morgan and a step daughter Susan Batson.

A graveside service will be held at 12:00 p.m. on Friday, August 19, 2022 at Trinity Lutheran Cemetery in Nashville with Rev. David Benning officiating.  Memorial contributions may be made to the Coulterville Care Center.  Styninger Funeral Home in Nashville is in charge of arrangements.  Online expressions of sympathy may be made at www.styningerfuneralhomes.com or on the funeral homes Facebook page.