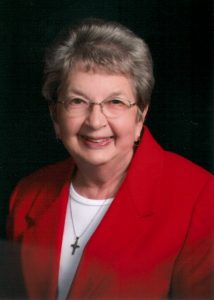 Marlene A. (Fischer) Maschhoff, 88, passed away on Thursday afternoon, August 11, 2022 at St. Louis University Hospital, from injuries she sustained in a car accident on August 6, 2022.

Marlene was born February 11,1934 at home on her parents’ farm near Streeter ND.  She was baptized on May 6, 1934, the first weekend that the weather allowed her parents, Alvina and Edward Fischer, to finally travel the road to Streeter.   Marlene was confirmed on April 4, 1948, with the confirmation verse Matthew 28, verse 20.

On July 25, 1954, she married Wayne A.  Maschhoff in Sacramento, CA, and he survives.  She worked as a secretary for the U.S. Air Force in Duluth, MN for two years while Wayne was stationed at the Duluth Air Force Base.  In 1956, she and Wayne moved to their rural Carlyle, IL farm.

She worked alongside Wayne at their farm, as well as serving as the bookkeeper for Cash Co-op for 33 years.  In 1979, she and Wayne co-founded Maschhoff Pork Farm Inc., along with their sons David and Ken. She was an active member of Clinton County Farm Bureau Women’s committee,  Illinois Pork Producers Association, Trinity Lutheran Ladies Aid, and Lutheran Women’s Missionary League.

For 15 years, Marlene and Wayne volunteered during the winter months at the Flywheeler Antique Engine Club in central Florida, where they made many new friends and created wonderful memories.

In lieu of flowers, memorials may be made out to Christ Our Rock Lutheran High School of Centralia, IL, Trinity Lutheran Church of Hoffman, or St. John’s Lutheran Church—New Minden.

Funeral services are pending at this time and will be posted on the Zierenfuneralhome.com as well as the CaringBridge.org web site.