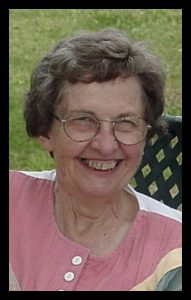 Mrs. Marlene Brammeier of Oakdale, IL, departed this life at Friendship Manor Healthcare Center in Nashville, IL on Monday, August 15, 2022, at 4:32 P.M.  She had attained the age of 91 years, 7 months and 29 days.

Mrs. Brammeier was born on December 16, 1930, at St. Louis, MO the daughter of Floyd and Jane Patton.  She was united in marriage to Noel Brammeier on October 29, 1949, at the First Baptist Church in Nashville, IL and he preceded her in death on November 17, 2018.

Marlene was a life-long resident of Oakdale, IL.  She was a member of the First Baptist Church in Nashville, serving as a Sunday School teacher and she also signed for the hearing impaired.  She assisted her husband with numerous volunteer jobs in Oakdale, especially at the Village Hall.  She worked for a while at the Friendship Manor Nursing Home as a cook after raising her family and was the primary care giver for her mother until her passing.  She then worked with her husband as custodians of Oakdale Grade School.  Marlene enjoyed going to the grandkids’ sporting events, fishing, cooking, baking and spending time with family.

Funeral services will be held at the Oakdale Village Hall in Oakdale, IL on Friday, August 19, 2022, at 11 A.M. with Rev. Scott Sharp. Interment will follow in the Oakdale Cemetery

Friends may call at the Oakdale Village Hall on Friday from 9 A.M. until the service hour.

Should friends desire, memorials can be made to the Village of Oakdale or the First Baptist Church of Nashville and will be accepted by the Campagna Funeral Home, who is assisting the family with arrangements.