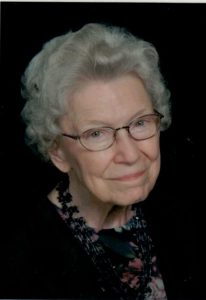 Alma Anna Muenter, 95 of Hoyleton, passed away at 3:45 a.m. on Wednesday, September 14, 2022 at SSM Good Samaritan Hospital in Mt. Vernon.  She was born on July 23, 1927 in Hoyleton, the daughter of Gustav and Anna Reinkensmeier Rommelmann. She was united in marriage to Alden H. Muenter on September 16, 1951 at Trinity Lutheran Church in Hoyleton by Rev. Reith.  Adlen preceded her in death on November 10, 1997.  Also preceding her in death were her parents, a brother Carl Rommelmann, a sister Eunice Strickert, a sister-in-law Doris Rommelmann and a nephew.  Left to mourn her passing are 2 sons; Mike (Shirley) Muenter and Jim (Kate) Muenter both of Hoyleton.  A daughter Chris (Don) Strom of Sarasota, FL, a brother-in-law Rev. Robert Strickert of Statesboro, GA.  7 grandchildren; Melissa (Matt) Eschmann, Christopher (Kristen Smith) Muenter, Cole, Shane, Shae and Maren Strom and Jesse (Lisa) Muenter.  4 great grandchildren; William and Ella Eschmann, Camden and Atli Muenter.  3 nieces, 3 nephews and their families.

Alma was a graduate of Nashville High School where in 1945 her class voted her most likely to become a St. Louis Cardinal Bat Girl. She worked in accounting at Clover Leaf Grain Elevator and later as a secretary at Continental Telephone Company both in Hoyleton.  She was a lifelong member of Trinity Lutheran Church in Hoyleton where she taught Sunday School, was active in the ladies aid, LWML, chime choir and bible study. She was a volunteer at the Braile Center in New Minden from 1998-2014, a beloved 4-H leader, member of the Hoyleton Community Club and Hoyleton American Legion Auxillary.  She was passionate about the St. Louis Cardinals, enjoyed cooking, gardening, sewing, learning and sharing her knowledge with family and friends.

Funeral service will be held at 11:00 a.m. on Wednesday, September 21, 2022 at Trinity Lutheran Church in Hoyleton with Rev. Nathan Wollenberg officiating. Burial will follow in the church cemetery.  Friends may call from 9:00 a.m. until 10:45 a.m. on Wednesday at the church. Memorial contributions may be made to Lutheran Women’s Missionary League Southern Illinois District for either their Scholarship Fund or Pastor’s Gift Fund. Styninger Funeral & Cremation Chapel in Hoyleton is in charge of local arrangements. Online expressions of sympathy may be made at www.styningerfuneralhomes.com or on the funeral homes Facebook page.