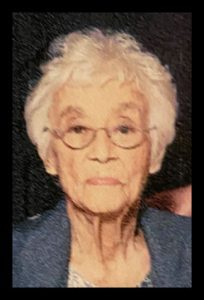 Florence was born August 29, 1919, the eldest of five daughters to, John R. and Elizabeth K. Ellermeyer, in Washington County, Il. She graduated from Ashley High School in 1939 and went on to graduate from Brown’s Business College in St. Louis MO.

Florence married Charles F. Seibert on June 2, 1945 in DuBois, Il.  She was a farmer’s wife and a homemaker in her early adult life and later a secretary at the Washington County Farm Bureau office in Nashville, Il.

Visitation will be Monday September 19, 2022, from 9 am to 11 am at Campagna Funeral Home in Nashville with a service following at 11 am with Pastor Beverly Kahle officiating.  Burial will be at Tamaroa Cemetery immediately following.

The family expresses their gratitude and appreciation to all of the health care professionals, as well as the staff at Fountainbleau Lodge for their loving care of Florence for the last several years, The family also thanks all those who sent cards and prayers to brighten her day, as they were all appreciated by Florence.