Valerie Combs has completed a step she has been working on for years – to play college softball.

Combs signed her letter of intent on Wednesday, November 9, to become a Leatherneck for Western Illinois University.

“I am really excited and happy and proud to be here. I am really proud of how far I’ve come,” Combs said.  “I definitely owe it to my parents and my coaches who have really helped me. They have been such a great support system.” 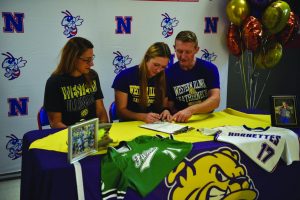 Combs is a 2022 IHSA All-State softball selection. She was also named to the Southern Illinois Coaches Association All-South team in both 2021 and 2022. During her sophomore year, she was named co-top defensive player of the year.

Combs is as much a leader in the classroom as she is on the diamond. She ranks No. 1 in her class with a 4.0 and is a member of the National Honor Society. She plays catcher as well as third and first base, and she also has played travel ball for Fusion National Unruh/Greenwood.

NCHS Softball Head Coach and Athletic Trainer Shaun Renth said Combs has a tremendous work ethic, and he is looking forward to seeing what she could accomplish as at WIU.

“I’m really excited for Val,” Renth said. “I know this is something that she had been dreaming about. She is a tireless worker, always out there on the field. Val is such a great athlete. She can pretty much play anywhere we need her to.”

A two-sport varsity starter for several seasons, Combs said she had always loved both volleyball and softball but in a way she always knew she would continue her athletic career. “I think in my heart it was always going to be softball,” she said.

In her career as a Hornette, Combs has accumulated a .449 batting average and nearly 98 career hits, including 44 singles, 18 doubles, 17 triples and 3 homeruns. She also has a .867 slugging percentage and a 1.372 on-base plus slugging average. 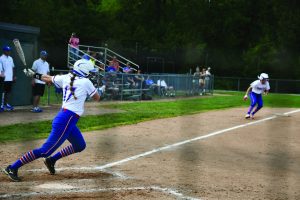 One of the lessons she is taking with her from her years at NCHS is the importance of working hard and stepping up whenever she can.

“That is something that I’ve learned here because you have to work hard in the classroom and out in the field,” Combs said. “And be a leader in whatever you do.”

Some of her favorite memories as a Hornette was during her sophomore year, when Nashville returned to the field for a shortened season after losing the 2020 season to COVID restrictions. The Hornettes bounced back that year to hold an impressive 24-5 record and the 800th program win. The team also took the regional title and the first game of the sectionals before falling to Freeburg. 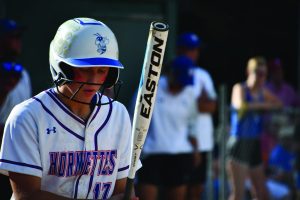 Getting the chance to take the field after the canceled season was something that meant so much to Combs.

“It felt like no other,” she said. “I was so happy to be able to play. We worked together as a team and were a really close group.”

Renth said the 2021 Hornettes were a close group who enjoyed working both on and off the field.

Combs said she is planning to major in either mechanical engineering or kinesiology and earn a minor in dietetics with hopes of beginning her career as a physical therapist. 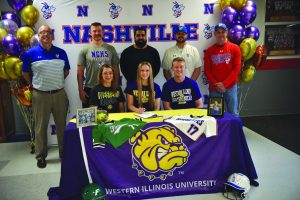