A standout slugger at Nashville Community High School will continue her athletic career as a Bearcat.

Jill Kuhl signed her letter of intent to play for McKendree University next year on Thursday, November 10.

“I am feeling excitement and happiness,” Kuhl said of her decision. “Playing in college used to be a dream that I had my whole life. Now it is happening, and it’s just good.” 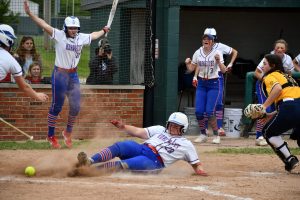 Kuhl said one of the things that drew her to McKendree was evident during her first visit to campus. She said she really liked how close knit the team was. It is something she can relate to, she says, having come from a smaller community.

“I love the family aspect,” she said. “I got there, and everyone just knew each other, and for me, I love that because I love knowing everyone.”

A leader also in the classroom, Kuhl serves as the vice president of the National Honor Society.

NCHS Softball Coach and Athletic Director Shaun Renth said he couldn’t be happier for Kuhl and her accomplishments on and off the field.

“She is an A-plus person,” Renth said. “As good of a player she is on the field, she is even a better individual. She is great in the classroom and one of the best kids to be around. She is always positive.”

Much of her career at Nashville has been playing infielder or first base. As a Hornette, Kuhl has a .400 batting average with 40 hits, including 24 singles, 8 doubles and 8 home runs. She also packs a wallop each time she steps up to the plate with a .720 slugging batting average and an outstanding 1.198 on-base plus slugging average. 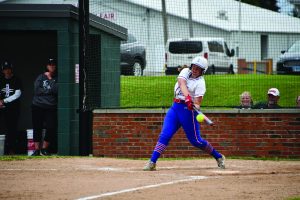 “She is really good for us in the middle of that lineup,” Renth said. “She works hard and is another one of those kids when you go down to the field, she is already there taking cuts.”

Kuhl said she is looking forward to the adjustment going from high school to college softball and the opportunity to play at a higher level. She said most of the lessons and memories that she will be taking with her involve the time spent at school with her friends and teammates.

Kuhl, who is currently recovering from knee surgery, said she is happy to be on the mend and looking forward to finishing her last year of high school softball on a high note.

Looking forward to the spring season, Renth said he believes the team will strive to work hard and hope to meet the same sort of success along the way.

“There are a lot of good teams in the area,” he said. “Hopefully we will try our best.”

Kuhl said she is definitely ready for the season to begin.

“Now I have something to look forward to,” she said of having her future plans sewn up. “It’s like heck yeah. It’s my senior year. Let’s blow them out of the water and do really well.”

Kuhl plans to major in pre-med biology with aspirations of becoming an oncologist. 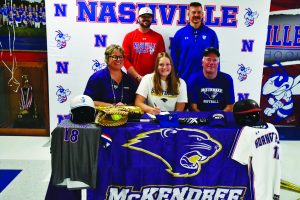