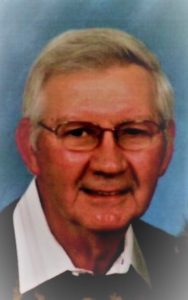 Norbert Elmer Zinck, 87, of Nashville, joined a host of dear friends and family in Heaven on December 1, 2022 after a life abundantly well-lived.

Norbert carried many titles in his lifetime. His first was as a child of God entrusted to Elmer and Theckla (Butz) Zinck. His birth completed the Zinck family, and he was also given the title of little brother to Dorothy Lanter, Harvey Zinck, and Ralph Zinck. He was proud to have been the cherished godson of Norbert Butz and Anastasia Butz. He was baptized as a Catholic at Holy Childhood in Mascoutah, IL where he would later attend school.

It is in his early years that he first assumed the role of farmer, milking cows on the family farm beginning at age 5. He would go on to purchase a welding kit at age 14, which afforded him the opportunity to learn to be a welder. This skill parlayed into his service in the US Army as a Private First Class from 1956-1964, both as an active serviceman as well as a reservist.

It is in his active military years that he first assumed the title of pen pal, and later boyfriend, to Charlotte (Dona) Streckfuss. Their romance elevated Norbert to husband on November 27, 1958. Norbert and Dona were beyond fortunate to celebrate 64 years of marriage, celebrating their final anniversary the Sunday before his passing.

Norbert and Dona settled as a married couple in Okawville, Illinois in late 1958. It is here that Norbert assumed the title of father to James (wife June) Zinck, Mary (husband Don) Rennegarbe, John (wife Lisa) Zinck, and Dan (wife Carolyn) Zinck. During this time, Norbert continued as a farmer, a welder, and began as a machinist as well as business owner, operating CZN Machines. He raised his family as a man of deep faith at St. Barbara’s Catholic Church.

In 1975, he assumed the role of home builder, completing the family home south of Okawville. Anyone who knew Norbert would call him a hard worker, as he farmed nearly 400 acres at this time. They would also call him the ultimate fixer as he could repair anything, and everything brought to the machine shop.

Norbert earned the title of Granddad, with the birth of Jeremy Rennegarbe in 1984. He would go on to earn this title 12 times with the births of Sarah (husband Ben) Zaring, Adam (wife Katie) Rennegarbe, and Nicole Rennegarbe; Jamie Zinck and Joshua

The title of terrible sleeper and late-night television watcher later in life took Norbert on the adventure of a lifetime. He copied a phone number down after listening to a request for agriculture experts to serve in countries in need. Norbert’s passport amassed stamps during twenty-two foreign assignments, and he served as an expert, sometimes in potatoes, sometimes in wheat, sometimes in corn, or soybeans, but always in farming. It is during these trips that Norbert was energized as an adventurer, a problem solver, a learner, and a friend to many.

Norbert will be surely missed, but his life served as an example of curiosity, ingenuity, resilience, of a gregarious spirit, of a deep work ethic, and of an even deeper faith. These underpinned every role that Norbert assumed, and serve as just a smattering of what he will be remembered for.

Friends were able to call St. Barbara Catholic Church in Okawville on Tuesday from 9 a.m. – 11 a.m.

In lieu of flowers, the family would request mass offerings to be said in Norbert’s name.