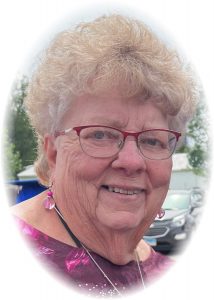 Phyllis was born at St. Mary’s Hospital, Centralia, IL on September 28, 1944 to Phil and Elizabeth (Zapp) Jack. She was the first of four children, Ronald, Samuel, and Robert Jack. She attended grade school in Beaucoup and Nashville. Phyllis attended Nashville Community High School. She graduated in 1962. Phyllis attended Barnes Hospital School of Nursing in St. Louis, MO. She graduated September 1965. After graduation, Phyllis worked at Washington County Hospital for many years. If you were born there between 1965-1995 there was a good chance that she gave you your first kiss. Mom loved being a nurse and helping anyone out who needed it. After she left Washington County Hospital, she worked at Sparta Community Hospital until she retired in 2009. Mom was a farmer’s wife. She grew a big garden and loved canning, quilting, crocheting and sewing. Phyllis was an avid reader. She was part of book clubs and Okawville Senior Center. She volunteered at Washington County Auxiliary. Phyllis was a member of St. Peters U.C.C. Stone Church and served on the board at one time.

Phyllis is preceded in death by her husband of 54 years, Robert Shubert; her parents, Phil and Betty Jack; her parents-in-law, Bruno and Esther Shubert; brother-in-law and sister-in-law, Walter and Hilda Shubert; and brother-in-law, Albert Galle. If you listen closely enough, you can hear the polka music playing and if it’s thundering then they are all dancing up a storm.