A couple of key Hornette players have decided to continue their athletic careers by joining the Blue Storm. 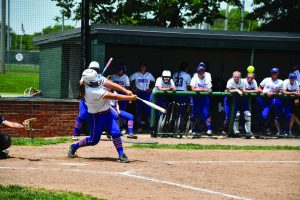 Colleen Jahnke slams a homerun during an at-bat her sophomore year. Photo by Charles Guffey

Both Jahnke and Rhine expressed their excitement for getting the opportunity to play college softball.

“Ever since day one, since I started playing softball, it has been my dream to play anywhere in college,” Jahnke said. “I’m very excited for the next step in my life.”

“I always knew I wanted to play in college,” Rhine said. “I picked SWIC because of the location. I love how close it is. I love the coach. I always preach on having a coach I can connect with and work well with because I am going to be with them 24/7.” 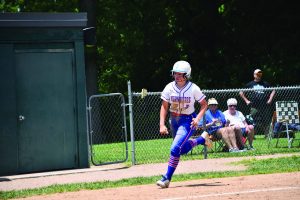 Korbi Rhine runs home during a game during the 2021 season. Photos by Charles Guffey.

“Coach Juenger is such a great guy, and it is definitely a great softball program,” she said. “They care not only about softball but family as well.”

SWIC Athletic Director and Head Softball Coach Michael Juenger said he was looking for key local talent who are all around good players. He added that while the team is expected to lose a couple of heavy hitters soon.

“They have a great program here in Nashville,” Juenger said. “Our school is starting to get better. Our softball program is getting better, and we need these kids because they work hard and they’re great kids. And they’re great softball players.”

Last season, Rhine batted .323 with six doubles and two home runs. She also stole 11 bases and had an on-base percentage of .396.

Jahnke’s mighty bat last season connected for 14 doubles, two triples and five home runs. She had a .429 batting average, a slugging percentage of .723 and an on-base percentage of .455.

Juenger added that he expects both Jahnke and Rhine to fit right into the lineup.

“They are both really good players all around,” he said. “They excel a lot at the plate. Both of them are so athletic. It’s nice to have athletes that you can move around and you are comfortable doing that. We are lucky to have good kids, good lower level coaches who take those kids and mold them into what we need.”

Rhine said one of the things she loves most about playing softball is working together as a team.

“I love going out there and being among my friends,” she said. “Softball is a very communicative sport so I love working with my teammates and lifting them up. The other thing  I love is fielding. You can kind of like knit pick at it, and I am a perfectionist. I love that I can keep fixing that and keep improving.”

For Jahnke, the softball diamond has been a second home, and where she has found her closest friends.

“I love it,” she said. “All of my teammates throughout the years and coaches have been so great to me. Every time I had a problem at home, I’d go out to the softball field, and it kind of relieves me. Softball is like my second family. We play as a team, not as an individual person. We try to get along as best we can, and I am for sure going to be taking that forward.

Rhine wants to become a funeral director. She plans to finish her general studies at SWIC and then later transfer to Forest Park in St. Louis.

Jahnke has aspirations of becoming a midwife and plans to enroll in the SWIC nursing program. 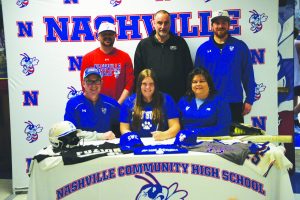 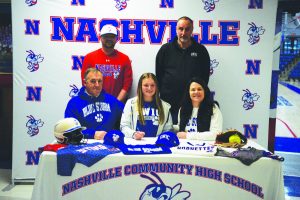