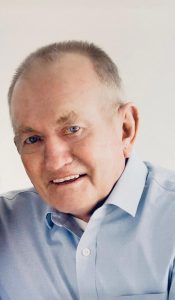 Bill was born in Belleville, IL on July 28, 1946, the son of Richard William and Rohma (nee Wisely) Patton. He was united in marriage to Sharon Kraft in the United Presbyterian Church in Oakdale on June 8, 1968, and she survives his passing.

Mr. Patton served in the United States Air Force. He was a farmer and he worked at the General Motors plant in St. Louis, MO until retiring after 31 years and then returning full time to his true love of farming. He was a faithful member of the Oakdale United Presbyterian Church where he had served as an Elder and Trustee. He also served as an Oakdale Township Trustee. Bill and Sharon enjoyed traveling and had visited all 50 states, many times with no particular itinerary, but they always found their way back home. He was a huge fan of Nashville Hornet Basketball and loved following his grandchildren in their various sporting activities.

In addition to his parents, he was preceded in death by a brother, Ronald Patton; his father-in-law, Floyd Kraft; and a brother-in-law, Dennis Loos.

Funeral services will be held at the United Presbyterian Church in Oakdale on Wednesday, January 25, 2023 at 11 A.M. with Rev. Jonathan Blackmon officiating. Interment will be in the Oakdale Cemetery.

Military graveside rites will be accorded by American Legion Post 110 of Nashville.

Friends may call at the United Presbyterian Church in Oakdale on Tuesday from 5 P.M. until 8 P.M. and again on Wednesday from 9 A.M. until the time of the service.

In lieu of flowers, memorials may be made to the family for the installation of a bench at the basketball court at the church or to the Oakdale Grade School, and will be accepted by the Campagna Funeral Home.